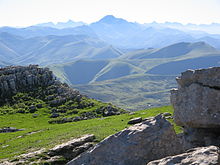 The Basques are the only people in Western Europe that have a non-Indo- European language. In fact, there is no clear relationship between Basque and any other existing language: it is an isolate, as far as we know.

The Basques are also genetically different from their neighbors. There is a component found generally in Europeans – the light purple at the bottom. You see it in Spaniards, Tuscans,

Tuscans, Russians, Lithuanians, Utah whites (mostly British),  the French –  but not in the Basques or Sardinians. They look to be a two-bean salad, made up from a mixture of the old Mesolithic hunters (Hyperboreans)  and the first farmers (Cardial culture and LBK, from the Levant, maybe).  While other Europeans are a mix of three ancient populations: Hyperboreans, southern farmers, and something else we call ‘west Asian’ for lack of a better name.  But this graph hints at interesting details.  The red component, the Hyperborean fraction, is lower in the old-fashioned two bean population than in Europeans generally. Surely this means that invading Indo-European populations already had a lot of red in them – possible, since the Hyperboreans extended very far to the East, all the way to Lake Baikal.   Note also that the ‘west-Asian’ component does not vary too much. If the last wave of invaders had mixed a lot with the LBK, you’d expect to see less and less of that ‘west-asian’ component as you move west – but it’s almost the same in Orcadians as it is in Russians or Lithuanians. It’s some lower in Spain, but there’s an obvious explanation for that, which I leave as an exercise for my readers…

Anyhow, that constancy, which is closely related to the fact that Fst across the entire North European plain is very small, has another obvious implication.  Not one that LBK-fans are going to like.

The Basques have certainly mixed with other peoples, but it must have been almost entirely outward gene flow, at least in the core of the Basque country.  Many Basques helped resettle Spain in the Reconquista, few non-Basques inmarried.  They would have had to learn the language.  Altogether, the Basques are a genetic relic from about six thousand years ago, based on what we know today.

This entry was posted in Amerindians, European Prehistory, Genetics. Bookmark the permalink.