An article by Sabrina Tavernise appeared in the New York Times a few days ago describing increasing perceptions of class conflict in America, and there is a lot of recent commentary in the press about this report from the Pew Charitable Trust that claims there is less class mobility here than in several other northern countries.   It is not very clear to me what the complaints really are or what alternatives exist. If there is any substantial heritability of merit, where merit is whatever leads to class mobility, then mobility ought to turn classes into hereditary castes surprisingly rapidly.

A start at looking into genetic consequences of meritocracy is to create the simplest possible model and follow its implications. Consider free meritocracy in a two class system, meaning that each generation anyone in the lower class who has greater merit than someone in the upper class immediately swaps class with them. Mating then occurs at random within class. There are no fitness differences, no selection at all, everything is neutral. It is convenient to discuss what happens in terms of IQ because IQ is familiar and, in northern industrial nations, closely related to merit. On the other hand we have to keep in mind that our focus on IQ is like that of the drunk searching for his keys under the lamppost: we can measure IQ but have no good way to measure honesty nor time preference nor conscientiousness and so on. 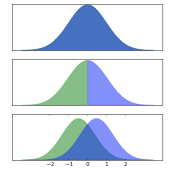 This figure shows an initial population with normally distributed merit. A new merit based class system is imposed such that the two new classes are of equal size. In this free meritocracy everyone with merit exceeding the population mean moves into the upper class and everyone with merit less than the average moves into the lower class. The second panel of the figure shows the resulting merit distributions by class before reproduction and the bottom panel shows the distributions after endogamous reproduction. This model assumes that the reshuffling of genes during reproduction leads to normal distributions in the next generation within classes.

The process continues for several generations. By analogy with IQ the additive heritability of merit is set to 0.6 so there are substantial random environmental effects. The second figure shows the evolution of class differences over four generations or about 100 years in human terms.

Class mobility after the first generation is 30% while after four generations it has declined to 10% and continues to decline after that.  The average merit in the two classes is about -1SD in the lower and +1SD in the upper on the original scale, corresponding to IQs of 85 and 115.

Recall that there are no fitness differences in this model. Still, after four generations, about 70% of the variance is between classes, which can be compared to  about 35% of the variance among continental human groups for random genetic markers, i.e. colloquially class differences are twice neutral race differences. (The familiar among-population figure of 15% made famous by Lewontin refers to gene differences while here we are comparing genotype differences of diploids, hence the difference between 15 and 35.)

A surprise to me from this model was the rapidity with which classes turn into castes: most of the action is in the first generation or so. In retrospect this seems so obvious that it is hardly worth saying but it wasn’t so obvious to me when I started toying with it.

Even though everything here is selectively neutral, I wonder about the extent to which this free meritocracy mimics selection. Any mutant that boosts merit in carriers will be concentrated in the upper class and vice versa. Greg and I discuss in our book how environmental change initially selects for dinged genes that are “quick fixes” in carriers but detrimental in homozygotes, citing sickle cell in humans, broken myostatin in beef cattle, and numerous others. Does this social system mimic selection?

A correlate of IQ in humans is myopia, one idea being that IQ boosters relax early developmental constraints on CNS growth resulting in eyeballs too big for the socket, leading to myopia. I have read somewhere that myopia is positively related to income in the US. Time to try to find that literature.

73 Responses to Class, Caste, and Genes