The recent popularity of men choosing to be castrated and wear a dress ( a ‘sex-change’) has some similarities to certain past practices. The people involved had very different things to say about their reasons, but it’s sometimes better to consider actions, rather than words.

The Skoptys were a secret sect in Tsarist Russia, known for castration of men and mastectomy of women.

Nobles, military officers, priests and merchants joined its ranks – not just peasants. In the late 19th century, there were scandals when some high-ups in the Orthodox church were found to be Skoptys. Pull down their pants: surprise! Cf The Kreutzer Sonata.

There may have been as many as 100,000 Skoptys by the early 20th century. The Commies seem to have wiped them out, confirming that there’s a little bit of good in the worst of us. 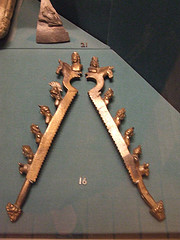 The Galli, the eunuch priests of Cybele [ Magna Mater], are another example. “The Galli castrated themselves during an ecstatic celebration called the Dies sanguinis, or “Day of Blood”, which took place on March 24.[4] At the same time they put on women’s costume, mostly yellow in colour, and a sort of turban, together with pendants and ear-rings. They also wore their hair long, and bleached, and wore heavy make-up. They wandered around with followers, begging for charity, in return for which they were prepared to tell fortunes. On the day of mourning for Attis they ran around wildly and disheveled. They performed dances to the music of pipes and tambourines, and, in an ecstasy, flogged themselves until they bled.[3] ”

Self-castration was un-Roman and forbidden to citizens, except for the period between Claudius and Domitian. So the Galli were generally foreigners.

Rome officially adopted this cult at a low point in the 2nd Punic war. It lasted for a quite a while: St. Augustine complained about them.